Elmorisms: A Legacy of Learning Leaders

The education world has lost a giant. Richard Elmore spent his career as a researcher and professor highlighting the importance of ongoing learning for educators and education leaders—helping us all get a grip on what our theories of action looked like in real time. “I know this is what you hoped to happen, but what is actually happening?” he would ask. We are honored to have learned from him and to carry on his legacy in our own work: To be, as he taught us, learning leaders.

We became Elmore’s students as inaugural members of Harvard’s groundbreaking EdLD program, originally designed to develop leaders not for the system as it currently exists, but to lead the transformation the system has long needed. The strategy? Identify a diverse group of high performing, mid-career practitioners and give them the support they need to take their work to the next level, give them access to the best thinkers and practitioners in education as well as the time and space needed to reflect on their own leadership practice, and open doors to a powerful network. And they knew that to do this well, it was critical for us to have strong relationships with our instructors and with each other. 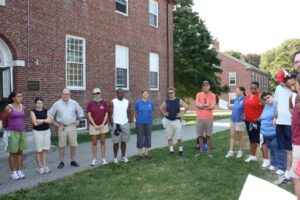 As program chairs, Elizabeth City, Richard Elmore, and Harry Spence also knew that real change wouldn’t be possible if the network they created wasn’t representative of the students our country serves, where over half of our public school students are students of color. In EdLD Cohort 1, 60% of us identified as leaders of color. That trend has continued until this day. 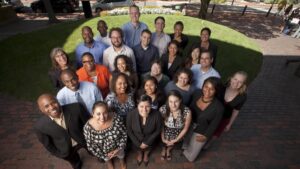 Richard Elmore was unique in his approach. He was cynical and sarcastic — a know-it-all who consistently riled everyone up. But it never came from a place that didn’t invite critical discourse and argument. He would consistently create space and time to listen and engage in a deeper discussion about the implications of where our ideas diverged and converged. He would take us to the edge of our learning and hold us to the highest of expectations balanced with the same level of support. “For every ounce of accountability, there needs to be an ounce of support.”

He taught us that if we were going to REALLY do this work well, it would require a fight. And he was training us for that fight. He would question when we were simply trying to “win by rearranging chairs on the Titanic,” reminding us of the dangers of isomorphism: “Beware of pulling the rubber band too far back that it’ll eventually snap right back in place.” 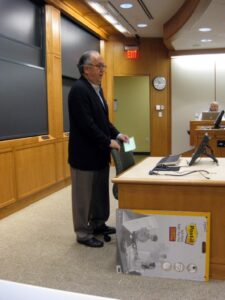 Elmore was also willing to admit error and model failure. We remember him standing in front of us in 2010, the very first year of the EdLD program, saying, “I usually walk in as the expert but here I am, about to embark on a journey with 25 experts. I am humbled beyond belief.” And at the end of year 1, when 90% of our cohort failed his performance assessment in his Leaders of Learning course, we showed up to class for the fight he instilled in us (but this time with him).

In tears, he shared that one of his biggest pushes to educators is, “If the majority of your students are failing, you are not teaching. They are not the ones who failed. Take a look in the mirror.”

And then he said, “I failed. I am requesting a do-over and a second chance at re-teaching this content and the task at hand.” He knew, as he would always say, that “task predicts performance.” He also knew that we had done exactly what he asked us to do. He would always say, “If the students did exactly what the teacher asked them to do, what would they know and be able to do?” A cohort of doctoral students had done exactly what he asked us to do, and the onus was on him. So, he vulnerably admitted error, course corrected, and modeled learning in real time. 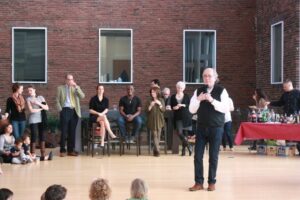 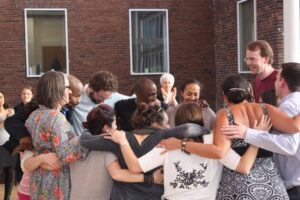 Elmore was an exceptional pedagogue. He would provoke us with the Elmorisms that would live in our practice as we were studying at Harvard and in our work today within the various roles we hold across the education sector. He knew and reminded us that the specific spheres of influence and control in front of us all were representative of the larger system, comparing it to fractal architecture. “The problems of the system are the problems of the smallest unit.” 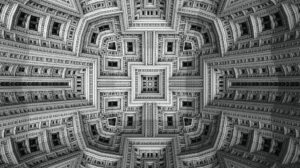 And learning didn’t only take place in the four walls of a classroom. As part of the program, we would visit many schools together. The first time we visited a school, he observed us engaging with a level of criticality which can be hard not to do as seasoned educators. So, before we engaged in the next visit, he sat us down for a hard conversation. “I don’t want to see you giving off–the–cuff, unsolicited advice and suggestions to teachers and leaders who are here every single day. Do you think you know more about their community than they do after you’ve visited for 30 minutes?” This is something we, Michele and Nancy, have repeated time in and time out, deeply understanding what it means to truly honor communities and contexts. Elmore knew that the answer was always in the room and not in some university classroom. He believed that those most proximate to the work should guide the work. According to Elmore, “We learn the work by doing the work.” He pushed, “The practice of leadership requires suspension of judgment and evaluation. It requires you to think in terms of growth and development and to be committed to the principal (person)” because “it has to be a learning enterprise in order to keep people engaged.”

As Candice Bocala, Elmore’s long-term teaching fellow and research assistant shared, “I got used to hearing his wisdom boiled down into witty sayings (Elmorisms). I spent untold numbers of office hours telling students that his was the kind of class that you would be puzzled and infuriated by in the present, but you would remember years into the future. “ 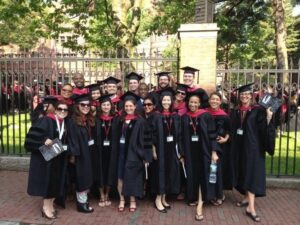 We are so honored that Richard Elmore helped to launch the EdLD program to give leaders like us who were already making significant contributions in our communities the opportunity to push ourselves to our learning edge. We feel fortunate to have had Elmore as a teacher, a colleague, and a friend. Even when we stepped into our professional roles in 2013, post-EdLD, Elmore stayed in touch and continued to support our practice. For example, he joined a Leadership Academy webinar in 2016 on Creating a Culture of Learning where he reminded us that his work for the past 20 years had been focused on helping leaders get a grip on what is actually happening in the interactions between teachers and students in the presence of content. During this webinar, he shared that he had visited 4,000 classrooms across six countries to date. He reminded us that leadership relationships were a lot like real-life relationships. “There are rough spots, smooth spots, times when it feels very energizing, times when it feels a little bit threatening, and time when it feels bumpy,” emphasizing how important trust is in any relationship, especially in one of supervision and support. He kept us humble reminding us over and over again, “Your experience does not qualify you to be a coach, mentor, or leader. You have to commit to developing a set of skills around human understanding, interaction, trust and mutual commitment.”

As we continue our journeys, we and every single leader Elmore has ever interacted with will remember what he taught us, especially, “If your ego is bound up in your prior success, you will struggle. You need to be a learner.” Learning meant changing our minds and our thinking with frequency, as an Elmorism, he called it, “I used to think…Now I think…”

The day Richard left us in February 2021, Liz City reminded our cohort, “You are part of his legacy. He saw each of you, fully, for all you could be and do. You knew him as he knew you as part of our community of love.” Richard holds not only a legacy of learning for all of us who had the privilege to be touched by his wisdom and love, but a legacy of what it means to be a learning leader. 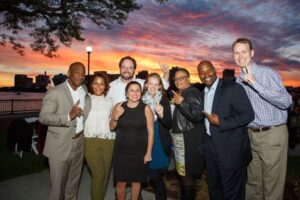 Members of EdLD Cohort 1 during the annual EdLD Convening (2016)

We love you and promise to keep learning as we lead.

Michele Shannon is Executive Vice President of Client Services for The Leadership Academy. Michele was formerly Chief of Schools for Boston Public Schools and the Sr. Director of Administrator Development for Los Angeles Unified School District.

Dr. Nancy B. Gutiérrez is President & CEO of The Leadership Academy. A graduate of Harvard’s Doctor of Education Leadership program, she has spent much of her career as a teacher and principal in her home community of East San Jose, CA, a predominantly Mexican-American community, where she was named California’s ACSA Region 8 Middle School Principal of the Year.

FULL BIO  |  all posts by Nancy B. Gutiérrez

Dr. Nancy B. Gutiérrez is President & CEO of The Leadership Academy. Nancy joined The Leadership Academy in 2014 and has served as National Leadership Designer and Facilitator, Vice President of District Leadership, and Chief Strategy Officer. She was named President & CEO in July 2018 and continues to serve as an executive leadership coach and facilitator for school systems across the country. She was a Fall 2019 Pahara-Aspen Education Fellow, and in February 2020 was named among the 100 most powerful education leaders in New York by City & State New York. Nancy is a frequent keynote speaker for local and national education organizations and has authored numerous pieces on education leadership and equity for national publications including Education Week, Kappan, The74, and Hechinger Report. Nancy began her career as a teacher and principal in her home community of East San Jose, CA, where she was the founding principal of Renaissance Academy, the highest performing middle school in the district and a California Distinguished School. Nancy also led the successful effort to turn around the district’s lowest performing middle school. She was named the UC Davis Rising Star and Association of California School Administrator’s Region 8 Middle School Principal of the Year in 2010. Prior to her tenure with The Leadership Academy, Nancy launched a program for executive leadership advancement for the New York City Department of Education that led to superintendent certification. Nancy is a graduate of the inaugural cohort of the Harvard Graduate School of Education’s Doctor of Education Leadership (Ed.L.D.) program and is a graduate of the Association of Latino Administrators and Superintendents (ALAS) Aspiring Superintendents Academy. She served on the national board of the Coalition of Essential Schools for more than a decade. She is an instructor at NYU and frequently teaches at the Harvard Principals’ Center institutes for School Turnaround Leaders, Urban School Leaders, and Race, Equity, Access, and Leadership. Nancy is a member of the Board of Directors at The Hunt Institute, Brightbeam, and Education Leaders of Color (EdLoC) and serves on the Latinos for Education teaching team. Find Nancy on Twitter @nancybgutierrez or LinkedIn.