When they cut you, I bleed

We say their names, just as we must say the names of all victims of hate. 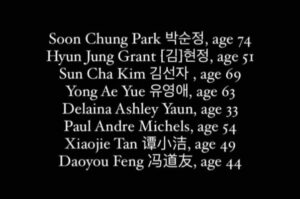 #SayTheirNames is not just a hashtag. It’s a demand to recognize and name those who have suffered at the hands of our country’s deep relationship with racism.

They were mothers, fathers, brothers, sisters, who left their houses on Tuesday, went to work, only to be murdered in cold blood. What was their “crime?” What did they do to offend their murderer? The Georgia police captain shamefully said the murderer, whose name we will not say, was simply “having a bad day.” But we all know the racism, xenophobia, and misogyny at play here: For six of the eight people in the Atlanta area who were killed on Tuesday, their crime was that they were Asian women. That’s it. They were being themselves.

As Geogia State Representative Bee Nguyen said, these murders illustrate “the vulnerability, the invisibility and the isolation of working-class Asian women in our country. And we know that vulnerability makes them targets.”

Just as we collectively raise our voices and outrage about racially charged violence and injustices committed against our Black and Latinx brothers and sisters, we must get loud about the injustices suffered by our Asian American Pacific Islander (AAPI) community. Hate against one of us is hate against all of us. In the words of Ibram X. Kendi, we are all “in a struggle to be fully human, and to see that others are fully human.”

When will we, as a nation, stop making it a crime to be our authentic selves?

And most shamefully, why do we continue to render our Asian American Pacific Islander community invisible in our fight against racism?

These murders are part of a larger trend of Anti-AAPI racism in American history. And since Covid-19 exploded in 2020, hateful people, fearful people, ignorant people have targeted, beaten, murdered our AAPI brothers and sisters, blaming them for what some public figures have hatefully labeled “the China virus.” A year ago, I wrote about this hate and these crimes. It has only gotten worse. In 2020, Asian American Pacific Islanders were targeted in nearly 3,800 hate incidents. In the first two months of 2021, another 500 AAPI members have suffered hateful attacks.

Activist Yuri Kochiyama offers inspiration. Following Pearl Harbor, Kochiyama and her family were imprisoned in a Japanese concentration camp in Arkansas, her father arrested as he lay in a hospital bed recovering from surgery, denied of further treatment. Her father died, and she and her family languished in the camp for two years. Out of that experience, a fighter was born. Kochiyama devoted her life to our collective struggle. She walked arm in arm with Malcolm X, and taught us to bring our own identity struggles to the broader struggle for human liberation. 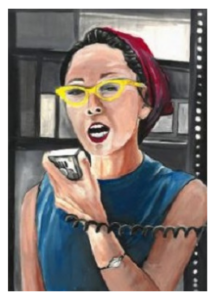 The Leadership Academy stands in solidarity with the AAPI community and is committed to building education leaders’ capacity to better understand and address the root causes of this hatred. Educators are in a unique position to arm our students, our colleagues, and ourselves with the tools to see the fear and ignorance rooted in this hate and the destruction it creates, and to feel empowered to unequivocally call it out and demand change.

On a personal level, I commit to:

Let us hear and live by the words of the great poet and activist Audre Lorde: “We can learn to work and speak when we are afraid in the same way we have learned to work and speak when we are tired. For we have been socialized to respect fear more than our own needs for language and definition, and while we wait in silence for that final luxury of fearlessness, the weight of that silence will choke us.”

Let’s commit to being better—to standing side–by–side with our AAPI community who have long been invisibly by our side during our most challenging moments.

Dr. Nancy B. Gutiérrez is President & CEO of The Leadership Academy. A graduate of Harvard’s Doctor of Education Leadership program, she has spent much of her career as a teacher and principal in her home community of East San Jose, CA, a predominantly Mexican-American community, where she was named California’s ACSA Region 8 Middle School Principal of the Year.

FULL BIO  |  all posts by Nancy B. Gutiérrez

Dr. Nancy B. Gutiérrez is President & CEO of The Leadership Academy. Nancy joined The Leadership Academy in 2014 and has served as National Leadership Designer and Facilitator, Vice President of District Leadership, and Chief Strategy Officer. She was named President & CEO in July 2018 and continues to serve as an executive leadership coach and facilitator for school systems across the country. She was a Fall 2019 Pahara-Aspen Education Fellow, and in February 2020 was named among the 100 most powerful education leaders in New York by City & State New York. Nancy is a frequent keynote speaker for local and national education organizations and has authored numerous pieces on education leadership and equity for national publications including Education Week, Kappan, The74, and Hechinger Report. Nancy began her career as a teacher and principal in her home community of East San Jose, CA, where she was the founding principal of Renaissance Academy, the highest performing middle school in the district and a California Distinguished School. Nancy also led the successful effort to turn around the district’s lowest performing middle school. She was named the UC Davis Rising Star and Association of California School Administrator’s Region 8 Middle School Principal of the Year in 2010. Prior to her tenure with The Leadership Academy, Nancy launched a program for executive leadership advancement for the New York City Department of Education that led to superintendent certification. Nancy is a graduate of the inaugural cohort of the Harvard Graduate School of Education’s Doctor of Education Leadership (Ed.L.D.) program and is a graduate of the Association of Latino Administrators and Superintendents (ALAS) Aspiring Superintendents Academy. She served on the national board of the Coalition of Essential Schools for more than a decade. She is an instructor at NYU and frequently teaches at the Harvard Principals’ Center institutes for School Turnaround Leaders, Urban School Leaders, and Race, Equity, Access, and Leadership. Nancy is a member of the Board of Directors at The Hunt Institute, Brightbeam, and Education Leaders of Color (EdLoC) and serves on the Latinos for Education teaching team. Find Nancy on Twitter @nancybgutierrez or LinkedIn.